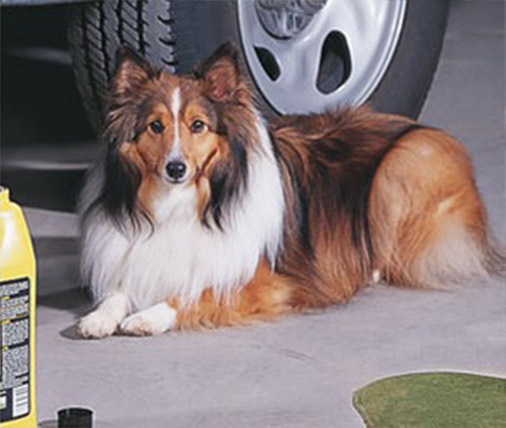 As we head into the cooler months, it is a good time to remind everyone of the dangers of antifreeze ingestion in dogs and cats. Antifreeze contains ethylene glycol, which when metabolized by the liver, creates toxic metabolites that cause damage to kidneys. Very small amounts of ethylene glycol can cause kidney failure and death (Lethal dose in dogs is 2-3 ml/lb and 0.64 ml/lb in the cat). For example, 2 tablespoons (30 ml) could be lethal to a 15 pound dog, and ½ teaspoon (2-3 ml) is lethal to a 10 pound cat. Antifreeze (Ethylene Glycol) poisoning remains one of the few toxins that we have an antidote for, but early recognition and administration of the antidote is imperative to successful outcomes. Delays in recognition of exposure and subsequent treatment often results in fatal outcomes.

Ethylene glycol exposure requires early recognition and aggressive medical treatment to survive. Any pet suspected of being exposed to ethylene glycol should be seen by a veterinarian as soon as possible.

Blood work and antifreeze tests can be performed early after exposure to test for lethal ingestions. Antidotes, such as fomeprizole (4-methylpyrazole, 4MP) or ethanol, must be instituted as a soon as possible to be effective. The treatment goal of antidotal therapy is to prevent the conversion of ethylene glycol to its more toxic metabolites and promote the excretion of ethylene glycol through the kidneys.

Hospitalized care and intensive monitoring is required for pets exposed to ethylene glycol. Most pets require multiple days of medical treatment including monitoring of urine output, monitoring of kidney values, acid-base tests and other indicators of a worsening condition.

Several factors determine the prognosis for survival after exposure to ethylene glycol:
1) The amount ingested (large amounts typically result in a poor prognosis).
2) The time between ingestion and the beginning of antidotal treatment (dogs treated within 5 hours of ingestion have the best prognosis).
3) The severity of clinical signs that develop.
4) The degree of renal (kidney) compromise (dogs with elevated kidney values at the time of admission are unlikely to survive).

Any pet with suspected or confirmed exposure to Antifreeze (ethylene glycol) needs to be seen by a veterinarian as soon as possible. Time is the enemy, as a delay in treatment could mean that the antidote will be ineffective in preventing the conversion of Ethylene glycol to its toxic metabolites.

Prevention is the best defense for toxin ingestions. Vehicles should be checked frequently for leaks and any fluid spills should be cleaned up as soon as possible. All containers of antifreeze should be sealed securely and clearly marked. Do not allow pets to roam unsupervised. Consider using environmentally friendly antifreeze products that do not contain ethylene glycol.