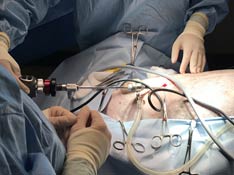 What is Gastritic Dilatation and Volvulus?

Gastric Dilatation and Volvulus (GDV) is a life-threatening condition affecting dogs. It is a common occurrence in large and giant breed dogs and is frequently referred to as “Bloat”. For reasons that are not completely understood, the stomach fills with air and sometimes food. With enough dilation, the stomach rotates in the abdomen, a condition which is called volvulus. The rotation can lead to blockage of the blood supply to the stomach and the spleen. Many patients present in shock and this condition is a surgical emergency.

What causes Gastritic Dilatation and Volvulus?

Several studies have been published that have evaluated risk factors and causes for gastric dilatation and volvulus in dogs. This syndrome is not completely understood; however, it is known that there is an association in dogs that:

What breeds are most affected?

Any breed of dog can have a GDV but most commonly seen breeds include Great Danes, Weimaraners, St. Bernards, Setters, Bernese Mountain dogs, Standard Poodles and Poodle mixes.

What are initial clinical signs?

Initial clinical signs are due to abdominal pain and discomfort. You may notice your dog has a “bloated” abdomen. Another common sign is non-productive vomiting, where they retch but are unable to vomit. As the disease progresses, your dog may be weak or recumbent and collapse.

How is GDV diagnosed?

Abdominal X-rays are used to confirm the presence of a GDV. Additional tests, including blood work to look for other metabolic disturbances and an ECG to determine heart rhythm abnormalities, are commonly performed.

A lateral radiograph (x-ray) of a dog with a gastric volvulus. The stomach is markedly distended with gas (shows up as black on the radiograph) and the stomach is occupying nearly the entire abdomen

What is the treatment for GDV?

Surgery should be performed immediately, as mortality increases with longer duration of clinical signs. Surgery involves returning the stomach to its normal position and a full exploration of the abdomen is performed. To prevent the stomach from twisting again, a gastropexy is performed to permanently attach the stomach to the body wall.

Can a GDV be prevented?

In high-risk breeds, a prophylactic gastropexy can be performed to prevent the occurrence of a GDV. This surgery can be performed in dogs as young as 6 months of age, and can be combined with general anesthesia for a spay or neuter procedure.

A laparoscopic assisted gastropexy can be performed (pictured below). This is a minimally invasive surgical approach requiring only 2 small incisions and laparoscopic cameras and instruments to facilitate the gastropexy.